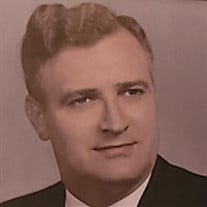 PRINCETON – Wintfrey "Wimpy" Shrewsbury, 94, passed peacefully to our Heavenly Father with family by his side on December 21, 2021 at Stonerise Princeton. The family would like to thank the entire staff at Stonerise for such excellent care during his stay. Wimpy was born in Raleigh County to the late Wiley Wintfrey Shrewsbury and Gracie Shrewsbury Blankenship. Following graduation from Matoaka High School, he enlisted in the Coast Guard and served in both the Atlantic and Pacific theaters during WWII. Following his military discharge, he worked in the coal mines for six years with Turkey Gap Coal and Coke Company. He was also employed for 10 years with Maidenform, Inc. of Princeton. Dedicating decades to Civil Service, Wimpy served 18 years as Assessor of Mercer County. Moving the county from a Class III county to a Class I county in order to provide funding for schools, as well as, police and fire departments. Wintfrey’s efforts assisted in paving the way for economic growth for the city of Princeton for decades to come. Wintfrey also served as Mercer County Sheriff from 1969 until 1972. Prior to that, he was elected and served eight years as constable from the East River District. Wintfrey was one of the first magistrates in Mercer County, serving nearly two years under appointment by Mercer County Commission. Wintfrey also served as treasurer for the West Virginia Sheriff's Association and was a member of the United Mine Workers Union No. 6039. He was a long-standing member of Immanuel Baptist Church, Princeton Masonic Lodge, Princeton Royal Arch Masons No. 44, Eastern Star Chapter No. 513, Princeton Moose Lodge, the Fraternal Order of Police and Riley Vest Post No. 9 of Bluefield. He was named as Mercer County's "Outstanding Democrat" in 1990. He is preceded in death by his beloved wife, Marie Whitt Shrewsbury; daughter, Sheila Faye Croy; step-father, Lacy Blankenship; sister and brother-in-law, Rema and Charles Blankenship; nephew, Charles Howard Blankenship and brother-in-law, Clifford Hoffman of Paradise, California. Survivors include grandsons, Stephen Croy, Jonathan Croy and wife, Tara and several grandchildren; sister, Sharon Rose Hoffman of Paradise, California, niece, Susie Hoffman and husband, Blaine Wells also of California. brother-in-law, Mason Whitt; niece Sherry Johnson and husband, Bill; great niece, Lisa Johnson and husband Kevin and great nephew, Mark Sharpe and wife Danielle Mahaffey. Funeral services will be conducted at 7:00 p.m. Wednesday, December 22, 2021 at Bailey-Kirk Funeral Home in Princeton with Dr. Dan Jividen officiating. Military honors will be conducted by the Mercer County Veterans Honor Guard. A private graveside service will be conducted on Thursday, December 23 at Resthaven Memorial Park. Friends may visit with the family from 6:00-7:00 p.m. at the funeral home. Arrangements by Bailey-Kirk Funeral Home in Princeton. Online condolences may be sent to the family at www.bailey-kirk.com.

PRINCETON &#8211; Wintfrey "Wimpy" Shrewsbury, 94, passed peacefully to our Heavenly Father with family by his side on December 21, 2021 at Stonerise Princeton. The family would like to thank the entire staff at Stonerise for such excellent... View Obituary & Service Information

The family of Wintfrey "Wimpy" Shrewsbury created this Life Tributes page to make it easy to share your memories.