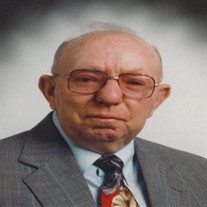 KANNAPOLIS, NC - William “Billy” Patrick Powell, 87, of Kannapolis, NC, formerly of Princeton, passed away Sunday, July 29, 2018 at the Tucker Hospice House in Kannapolis, NC. Born February 27, 1931 in Rhodell, he was the son of the late William W. Powell and Mattie Gilmore Powell. Billy worked for the Railroad for many years before retiring. He enjoyed working in the garden, loved his church and his fur baby, Molly. In addition to his parents, he was preceded in death by a brother Freddy Powell; and a sister Rosalee Welker. Those left to cherish his memory include his wife of 56 years Roberta Powell; two sons, Kelton Powell of Ft. Lauderdale, FL and Todd Powell and wife Kimberly of Calgary, Canada; one grandson, Ethan Powell; and one brother, R.W. Powell and wife Norma of Princeton. Funeral service will be conducted at 1:00 p.m. Wednesday August 1, 2018 at the Piedmont Baptist Church, 5870 Wright Road, Kannapolis, NC with Dr. Mike Edwards officiating. Interment will follow at West Lawn Memorial Park in China Grove, NC. The family will receive friends Wednesday, August 1, 2018 from noon until service hour at the Piedmont Baptist Church, 5870 Wright Road, Kannapolis, NC. Whitley's Funeral Home in Kannapolis, North Carolina is in charge of arrangements. Information submitted by Bailey-Kirk Funeral Home in Princeton. Online condolences may be shared with the family at www.bailey-kirk.com.

The family of William "Billy" Powell created this Life Tributes page to make it easy to share your memories.

Send flowers to the Powell family.