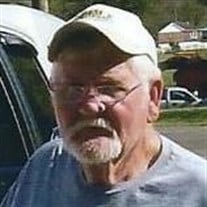 SPANISHBURG – Wendell Wilkie Shrewsbury, 77, of Spanishburg, died Thursday, February 22, 2018. Born February 18, 1941 at Beeson, he was the son of the late Cecil Shrewsbury and Amrie Shrewsbury Shrewsbury. Wilkie was a retired coal miner and a member of UMWA. He was a member of Gloryland Baptist Church at Camp Creek. In addition to his parents, he was preceded in death by his first wife, Margaret Shrewsbury; son, David Shrewsbury; and several brothers and sisters. Survivors include his wife, Gail Frango Shrewsbury; children, Wendell Shrewsbury, Jr., Bonnie Harris and husband Billy, Judith Wagner and husband Lynn and Martin Shrewsbury and wife Sarah; step-daughter, Jennifer Williams; several brothers and sisters; 13 grandchildren; and 4 great-grandchildren. A memorial service will be conducted at 5:00 p.m. Saturday, February 24, 2018 at the Bailey-Kirk Funeral Home in Princeton with Pastor Ray Mills officiating. Interment will be at Shrewsbury Cemetery in Beeson at a later date. In lieu of flowers, memorial contributions may be made to Gloryland Baptist Church, c/o Ray Mills, 311 Camp Creek Road, Camp Creek, WV 25820. Online condolences may be shared with the family at www.bailey-kirk.com.

The family of Wilkie Shrewsbury created this Life Tributes page to make it easy to share your memories.