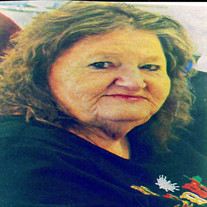 PRINCETON – Wanda Sue Gilley, 75, of Princeton, died Sunday, December 31, 2017. Born September 14, 1942 in McDowell County, she was the daughter of the late Welch Hicks Tilley and Sarah Lafferty Tilley. Mrs. Gilley was a homemaker and was of the Pentecostal Holiness faith. In addition to her parents, he was preceded in death by her husband, Joseph Gilley. Survivors include six children, Barry Bailey of Gaston, SC, David Gilley and wife Cynthia of Gaston, SC, Terry Gilley and wife Paggy of Princeton, Brian Gilley and wife Melody of Princeton, Joe Gilley, Jr. and wife Kim of Sterling, VA and Nancy Barie of Bluewell; two sisters, Drema Tilley of King, NC and Pat Crotts and husband Raymond of Kernersville, NC; one brother, Douglas Tilley of Princeton; 15 grandchildren; and several great-grandchildren. A memorial service will be conducted at 12:00 p.m. Friday, January 5, 2018 at Point of Contact Ministries on Cherry Street in Bluefield with Evangelist Robert Jones officiating. A private burial was in Roselawn Memorial Gardens in Princeton. Arrangements by Bailey-Kirk Funeral Home in Princeton. Online condolences may be shared with the family at www.bailey-kirk.com.

The family of Wanda Gilley created this Life Tributes page to make it easy to share your memories.

Send flowers to the Gilley family.