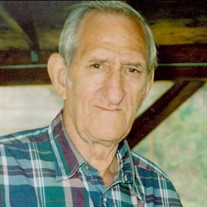 PRINCETON – Ursel J. (UJ) Keene, 92, of Princeton, passed away from a brief illness on Saturday, December 25, 2021 surrounded by his family. Born December 13, 1929 in Richlands, VA, he was the son of the late Milton Thomas Keene and Goldie May Dye Keene. UJ served in the Korean War, returned home to start a family and worked for Tinder White and Cole Motor Company in Bluefield, before opening his business, Keene Truck Parts in Bluewell. He was well known in the CB radio business for selling and repairing radios and went by the name “Ranger.” UJ’s passion was working, rather it be at his business, or repairing anything that was broken. In the last few years, he enjoyed working at his sawmill, and couldn’t wait to get back to cutting down trees and sawing lumber. He will be greatly missed by his family and friends. Survivors include his faithful and loving wife of 70 years, Elsie Lorine Bumgarner Keene; two daughters, Deborah Beatrice Keene Davis and spouse Gary of Hagerstown, MD and Ethel Carol Keene of Abingdon, VA; one son, Steven Douglas Keene and spouse Patricia of Galax, VA; two brothers, Thomas and Jack; one half-sister, Judy Jonelle Smith; two step-sisters, Della Burnette and Betty Schwartz; and three grandchildren, Staci Davis Wroblewski, Aaron Davis and Austin Keene; and four great grandchildren, Camille and Khloe Wroblewski and Lincoln and Jackson Davis. Funeral services will be conducted at 11:30 a.m. Thursday, December 30, 2021 at the Bailey-Kirk Funeral Home in Princeton with Pastor John Branham officiating. Private interment will follow at Greenhills Memory Gardens in Claypool Hill, Virginia. The family will receive friends from 10:30 a.m. until service hour at the Bailey-Kirk Funeral Home in Princeton. Online condolences may be shared with the family at www.bailey-kirk.com.

PRINCETON &#8211; Ursel J. (UJ) Keene, 92, of Princeton, passed away from a brief illness on Saturday, December 25, 2021 surrounded by his family. Born December 13, 1929 in Richlands, VA, he was the son of the late Milton Thomas Keene and Goldie... View Obituary & Service Information

The family of Ursel (UJ) Keene created this Life Tributes page to make it easy to share your memories.

Send flowers to the Keene family.