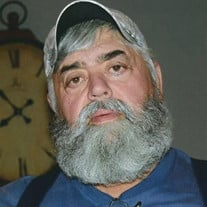 PRINCETON – Timothy Wayne “Timbo” Billings, 61, of Princeton, went to Heaven on Tuesday, February 20, 2018 after fighting a battle with pancreatic cancer. Born December 4, 1956 at Welch, he was the son of the late Ward Billings and Flossie Gross Billings. Mr. Billings retired after 38 years as a heavy equipment operator at Pounding Mill Quarry. In his spare time, he enjoyed fishing, hunting, flea marketing and spending time with his family. He was of the Baptist faith. Survivors include his wife of 42 years, Pat Richardson Billings; children, Melissa Davis and husband Richard of Vienna and Timothy Billings and fiancée Joyce Bradley of Lowgap, NC; brothers, Rusty Billings and companion Kathy of Hiawatha and Ricky Billings and wife Rhonda of Lake Shawnee; sisters, Peggy Pelkey of Cana, VA and Shirley Patton of Princeton; grandchildren, Abigail Davis, Makaylin Billings, Brodee Billings, Isaac Mitchem, Noah Bradley and Keelee Bradley; a host of nieces and nephews who loved him dearly; and special friends, Rod and CeeAnn Tignor and their son, Junior. A graveside service will be conducted at 11:00 a.m. Friday, February 23, 2018 at Roselawn Memorial Gardens in Princeton with Pastor Algie Cook officiating. Friends and family attending the service are asked to meet at the Bailey-Kirk Funeral Home in Princeton at 10:30 a.m. In lieu of flowers, memorial contributions may be made to Amedisys Hospice. Arrangements by Bailey-Kirk Funeral Home in Princeton. Online condolences may be shared with the family at www.bailey-kirk.com.

The family of Timothy Billings created this Life Tributes page to make it easy to share your memories.

Send flowers to the Billings family.