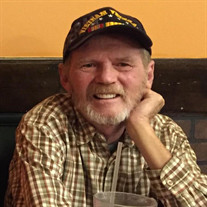 LERONA – Richard “Rick” Davis, 72, of Lerona, died Monday, January 17, 2022. Born August 18, 1949 in Princeton, he was the son of the late James Davis and Vesta Keuck Davis. In addition to his parents, he was preceded in death by his first wife, Lois Thompson Davis. Rick was a veteran of the US Marine Corps, having served in Vietnam. He was a former employee of Lashmeet Public Service District, Green Valley-Glenwood PSD and WV-American Water Co. Rick loved hunting, fishing, football, NASCAR and woodworking. Survivors include daughter, Lucretia Mullins and husband John of Pounding Mill, VA; sister, Donna Hicks of Wilmington, NC; and brother, Ted Davis and wife Joetta of Huntsville, AL. Special thanks to Amedisys Hospice and his caretakers, Kenny and Brittany Stinnette. Funeral services will be conducted at 1:00 p.m. Tuesday, January 25, 2022 at the Bailey-Kirk Funeral Home in Princeton with Pastor C.T. Lilly officiating. Military honors will be conducted by the Mercer County Veterans Honor Guard. Interment will follow at Wesley Chapel Cemetery at Rock. The family will receive friends Tuesday, January 25, 2022 from noon until service hour at the Bailey-Kirk Funeral Home in Princeton. Online condolences may be shared with the family at www.bailey-kirk.com.

The family of Richard "Rick" Davis created this Life Tributes page to make it easy to share your memories.

Send flowers to the Davis family.