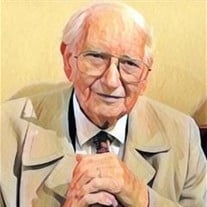 BLUEFIELD - Moving on to be with Jesus, Lawrence Bendix [LB] Larsen, 94, left this earth on Monday evening, August 19, 2019. His sweetheart of 69 years, Wilma, was by his side as he peacefully breathed his last breath. Lawrence was named “Bud” by his sister Alice, when he was born on April 26, 1925. His Dad, Hans Larsen, came to America at 18 years of age from Froyland, Norway. Martha Olsen Larsen moved to New York with her family from Arendal, Norway, when she was 4 years old. Together, the Larsen home was established on Staten Island, New York, for 52 years, where Bud graduated from Curtis High School in 1943. The call of God for ministry came during his US Army service, in 1943-1946, at the time of World War II. Bud then attended and graduated from North Central Bible College, Minneapolis, Minnesota, in 1950, with a diploma, and completed his bachelor’s and master’s degrees in Music Education at MacPhail College of Music, Minneapolis, Minnesota, in 1953. He did additional graduate studies at Union Theological Seminary, in New York, and at the University of Minnesota. LB’s full-time ministry began immediately after college in Sioux Falls, South Dakota, as an assistant pastor and minister of music. In 1952, he returned to Minneapolis and joined the North Central Bible College faculty. LB was ordained that year for ministry with the Minnesota District Council of the Assemblies of God. He became Chairman of the Music Department in 1960. Among his teaching assignments, he directed the College chorale, The Evangelaires. During the same years, he was a part-time minister of music at the Minneapolis Gospel Tabernacle. As a director of many choral groups, LB expressed “that there is ultimate joy in having the singers respond to directive interpretation, I call it, playing the human organ!” He has to his credit a number of published choral arrangements. Many summers, LB and Wilma served as Music Directors at Family Camp for the Lake Geneva Bible Camp in Alexandria, Minnesota. In 1971, LB accepted the position of Secretary (now called Director) of the National Music Department of the General Council of the Assemblies of God, Springfield, Missouri. During his tenure, he edited over 1000 musical compositions, produced two publications for full-time church musicians growing from 100 to over 1000, produced recordings of various choral publications, choruses, and a series of Spanish recordings and choruses, plus the supervision of the development and editing of the SING HIS PRAISE hymnal. Following his retirement in 1991, LB did part-time teaching at Central Bible College, Springfield, Missouri, and was the volunteer director of the Pioneer Praise Choir from Central Assembly of God, in Springfield, Missouri, with 72 members, releasing a CD of their music. Wilma, also a musician, showcased her musical talent on the marimba, vibraharp and piano. Together as instrumentalists, Bud and Wilma wrote arrangements, practiced and performed in churches and in concerts culminating in a CD recording project of 22 selections. Those left to cherish his memory include his loving wife, Wilma, whom he married on June 8, 1950; his three daughters and their husbands, Linda Darlene and Marshall Flowers, Jr. of Bluefield, West Virginia; Lois Doreen and ER Freeman of Ipswich, Massachusetts; and Laurie Denise and Mark Muirhead of Pinehurst, North Carolina; five grandchildren, Luke and Jennifer Freeman of St.Paul, Minnesota; Brett and Jessica Flowers of Stratford, Connecticut; JJ and Lindsay Flowers Koh of Madison, Wisconsin; and Alex Muirhead of Orlando, Florida; and eight great-grandchildren, Ella, Grace, Lucy, and Molly Larsen Flowers; Alice, Thomas, and Agatha Freeman; and Maylin Muirhead. He was preceded in death by his parents, Hans (1974) and Martha (1992) Larsen, his sister, Alice Larsen Thomassen (2009), and his granddaughter, Rachael Rebecca Freeman Grudem (2005). The family prefers memorials to be made to the Roger Thomassen and LB and Wilma Larsen Scholarship Fund, managed by the Music Department at Evangel University, Springfield, Missouri. Designated contributions may be sent to the Evangel College Music Department or Advancement Office, 1111 N. Glenstone Avenue, Springfield, MO 65802 or call Evangel University, 417-865-2815, ext 7290, Advancement Office. A celebration of life service will be at 10:00 a.m. Monday, August 26, 2019 at Bailey-Kirk Funeral Home in Princeton, West Virginia. Interment will be at 2:30 p.m. at the Southwest Virginia Veterans Cemetery, Dublin, Virginia. Friends may visit with the family on Sunday, August 25, 2019 from 7-8 p.m. and on Monday morning from 9:30 a.m. until the service hour at the Bailey-Kirk Funeral Home. To view a video tribute to Mr. Larsen, or share condolences with the family, please visit www.bailey-kirk.com.

BLUEFIELD - Moving on to be with Jesus, Lawrence Bendix [LB] Larsen, 94, left this earth on Monday evening, August 19, 2019. His sweetheart of 69 years, Wilma, was by his side as he peacefully breathed his last breath. Lawrence was named... View Obituary & Service Information

The family of Lawrence Bendix Larsen created this Life Tributes page to make it easy to share your memories.

BLUEFIELD - Moving on to be with Jesus, Lawrence Bendix [LB]...

Send flowers to the Larsen family.