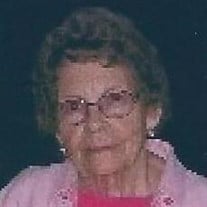 COVEL - Laura Alice Farley Liddle, 96, of Covel, and most recently of Moneta, VA, received her heavenly promotion on January 16, 2018 . She was born on September 6, 1921 in Arista, to the late Virgil L. and Flora Laxton Farley. She was preceded in her death by her loving husband of 67 years, Charles C. Liddle. She went to Heaven to join him on what would have been their 79th anniversary. She was also preceded in death by five siblings, Raymond Farley, Elsie Little, Louise Clark, Virgil “Buddy “Farley and Mary Grace Farley; and a grandson, Tony Miller. In their early years they began their family in North Carolina. Later they resided in Piedmont, West Virginia. The next 40 years they made their home in Covel, West Virginia surrounded by many friends and family. Their last move settled them in Midway, West Virginia where they enjoyed being close to family as well as their great neighbors, the McKinney’s. The last six years Laura Made her home in Moneta, Virginia with her daughter Bonnie and her son-in-law Tommy Milam while surrounded by many, many family members who loved having her here. She was “Mama Laura “to many who cherished her and will hold tight to the beautiful example of life that she was. She will always be remembered for her love that ran deep for faith in her Heavenly Father, family, friends and flowers. All of the children in her life were truly her greatest delight! Laura was known by all who knew her for her gentle nature, her kindness, and gifted by a true contentment in life. Laura was a long time member and the pianist at Covel Missionary Baptist Church. Later, she was a member of the Basin Freewill Baptist Church where she shared her musical talent for years. She was eager to share time visiting and laughing with friends and family. Some of her greatest pleasures were tending and watching her flowers grow, receiving and sending greeting cards and telling stories to her grandchildren and great grandchildren. Mrs. Liddle is survived by two sisters, Cleo Halsey and Ella Mae Moore both of Princeton; one brother, Tom Farley of Pennsylvania. Laura nurtured, loved and cherished 3 children, Nancy “Jean” Joyner of Fort Pierce, Florida, Bonnie Milam of Moneta, Virginia and Rusty Miller of Goodview. She was a “second mother” to their spouses Mike Joyner, Tom Milam and Melinda Miller. She has been an active influence in the lives of all of her grandchildren. Chuck Bevins and wife Jen Bevins, Danny Bevins and Gina Bevins Close all of Florida, Tammy Milam Kelly and husband Hal Kelly of Vinton, VA. Brian Milam and wife Kelly Milam and Katie Miller-Elswick and husband Cody Elswick all of Moneta, Virginia. We are most grateful that she shared her time, wisdom and life stories with her 14 great grandchildren and 4 great-great grandchildren. She was adored by a multitude nieces and nephews who were all an encouragement and support in her last difficult health years. Laura was cared for and cared so much for a special friend Linda Cline and her husband Eddie of Moneta ,VA. We, all of her family, would like to thank the members of the Franklin County Hospice team of Rocky Mount, Virginia for their tender care and visits to our mother in these last months. They will forever hold a special place in our hearts. Funeral services will be conducted at 2:00 p.m. Sunday, January 21, 2018 at the Bailey-Kirk Funeral Home in Princeton with Rev. Marvin Mills and Rev. Gerald McKinney officiating, with her niece, Dr. Deb Halsey-Hunter speaking and Jeffery Brannon as pianist. Private interment will be at Roselawn Memorial Gardens in Princeton. The family will receive friends Saturday, January, 20 2018 from 6-8 p.m at the Bailey-Kirk Funeral Home in Princeton. Online condolences may be shared with the family at www.bailey-kirk.com.

COVEL - Laura Alice Farley Liddle, 96, of Covel, and most recently of Moneta, VA, received her heavenly promotion on January 16, 2018 . She was born on September 6, 1921 in Arista, to the late Virgil L. and Flora Laxton Farley. She was preceded... View Obituary & Service Information

The family of Laura Alice Liddle created this Life Tributes page to make it easy to share your memories.

COVEL - Laura Alice Farley Liddle, 96, of Covel, and most recently...

Send flowers to the Liddle family.