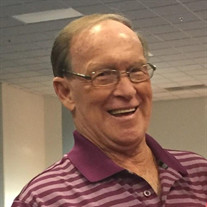 PRINCETON – Larry Lee Dove, 73, of Princeton, was called home by his Heavenly Father, the Lord Jesus Christ on Thursday, March 26, 2020. Larry was a devoted Christian and servant of the Lord. Born February 21, 1947 in Athens, he was the son of the late Ernest Dove, Jr. and June Reed Dove. Larry was a veteran of the US Navy and was a member of the Princeton Church of God. He was a real estate appraiser for 36 years. Larry loved his wife and family, especially his grandchildren who adored him. Larry was one-of-a-kind. He was liked and will be missed by many. In addition to his parents, he was preceded in death by one sister, Janice Dove; and one brother, Bo Worrell. Survivors include his wife of 17 years, Regina Wall Dove; children, Kira Cole and husband Jason of Princeton and Heather Varney and husband Timmy of Bluefield; grandchildren, Haley, Mady and Brody (Pedro) Cole and Gibson and Levi Varney; sister, Geraldine Kendall and her family; two brothers-in-law, Jason Wall and wife Tiffany and Johnny Wall and wife Michelle, who were also his friends, but most importantly his fishing buddies; sister-in-law, Kathy of Princeton and her family; nephews, Brett and Bryce Wall; sister, Karen Bridges and husband Donnie and family; loving cousins, Gail Marino and partner Jack Danielly and her family and Tommy (Tom Tom) Bailey and Kim Hall of Princeton; and all of his fishing buddies. There will be no services at the funeral home. Arrangements by Bailey-Kirk Funeral Home in Princeton. Online condolences may be shared with the family at www.bailey-kirk.com.

PRINCETON &#8211; Larry Lee Dove, 73, of Princeton, was called home by his Heavenly Father, the Lord Jesus Christ on Thursday, March 26, 2020. Larry was a devoted Christian and servant of the Lord. Born February 21, 1947 in Athens, he was... View Obituary & Service Information

The family of Larry Dove created this Life Tributes page to make it easy to share your memories.

Send flowers to the Dove family.