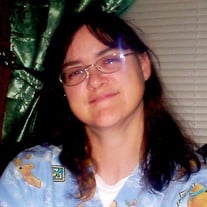 PRINCETON – Kathy McKinney, 53, of Princeton, died Monday, March 25, 2019. Born November 6, 1965 in Bluefield, she was the daughter of Carol Gillespie Smith Cox of Princeton and the late Roger Smith, Sr. Mrs. McKinney was a former employee of GlenWood Park Retirement Village. She was of the Pentecostal faith and loved spending time with her grandsons. In addition to her father, she was preceded in death by paternal grandparents, James and Gladys Smith; maternal grandparents, Henry and Cordie Gillespie; and sister, Carolyn June Smith. In addition to her mother, survivors include her husband, Alvin McKinney, Jr.; children, Chantell McKinney of the home, Jessica McKinney of Princeton and Caitlan McKinney of Lashmeet; grandchildren, Noah Wright, Ian Wright and Brantley Haynes; brother, Roger Smith and wife Julie of Princeton; sister, Lisa Perkins of Princeton; sister-in-law, Teresa McKinney Felger and husband Paul of Princeton; aunt, Onia Wade of Tennessee who was like a second mom; cousins, Vickie Sigmon of Follansbee, Jeffery Sigmon of Florida and Jimmy Sigmon of Tennessee; and several nieces and nephews. Funeral services will be conducted at 1:00 p.m. Saturday, March 30, 2019 at the Bailey-Kirk Funeral Home in Princeton with Pastor David Lee officiating. Interment will follow at John Riley Shrewsbury Cemetery on Arista Mountain. The family will receive friends Saturday, March 30, 2019 from noon until service hour at the Bailey-Kirk Funeral Home in Princeton. Online condolences may be shared with the family at www.bailey-kirk.com.

The family of Kathy McKinney created this Life Tributes page to make it easy to share your memories.

Send flowers to the McKinney family.