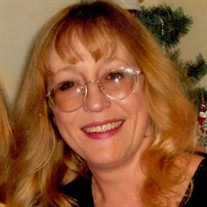 BLUEFIELD – Julie Perdue, 60, of Bluefield, died Friday, February 4, 2022. Born June 12, 1961 in Wilmington, DE, she was the daughter of the late Jerome Jennings and Jacqueline Cook Jennings. Mrs. Perdue was a graduate of Bluefield State College with a Bachelor’s Degree in business. She was a former employee of Cole Chevrolet in Bluefield. After her retirement, she enjoyed spending time with her grandchildren and gardening. In addition to her parents, she was preceded in death by brother, Jerry Jennings. Survivors include her husband, Robert Perdue; children, David Riggs and wife Sarah of Bluefield and Stephanie McGlothlin and husband Shawn of Sandlick; brothers, Matthew Jennings and his special friend, Linda of Pipestem and Luke Jennings and wife Lynn of Roanoke, VA; grandchildren, Riley Riggs, Dawson Riggs, Owen Riggs, Taylor McGlothlin and Carter McGlothlin; and nephew, Ross Jennings of Roanoke, VA. A memorial service will be conducted at 3:00 p.m. Tuesday, February 8, 2022 at the Bailey-Kirk Funeral Home in Princeton with Pastor C.T. Lilly officiating. In lieu of flowers, memorial contributions may be made to SECU Family House, 1970 Baldwin Lane, Winston-Salem, NC 27103. The family will receive friends Tuesday, February 8, 2022 from 2:00 p.m. until service hour at the Bailey-Kirk Funeral Home in Princeton. To view a video tribute to Julie, or share condolences with the family, please visit www.bailey-kirk.com.

The family of Julie Perdue created this Life Tributes page to make it easy to share your memories.

Send flowers to the Perdue family.