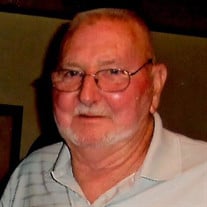 ROCK – Jim Cook, 82, of Rock, died Saturday, March 2, 2019. Born August 26, 1936 at Rock, he was the son of the late Kermit Cook and Ethel Herald Cook. Mr. Cook was a veteran of the U.S. Army having served in Germany during the Korean War era. He was a member of Lashmeet Freewill Baptist Church. He was a retired mechanic for the Board of Education and was a past-president of the Mercer County Coon Hunters Association. He loved his church and helping members of his community. The family appreciates the care and support he received from his friends, neighbors and church. In addition to his parents, he was preceded in death by daughter, Judy Moore; and brother-in-law, Donnie Baldwin. Survivors include his wife of 58 years, Charlotte Cook; two sons, Michael Cook of Rock and Bill Cook of the home; siblings, Gaye Pennington of Chase City, VA, Darrell Cook and wife Stella of Wayne and Myrna Baldwin of Bridgeton, NJ; and grandchildren, Matthew Moore, William Moore, Tiffany Franco and husband Tommy, Courtney Cook and Michael Cook. Funeral services will be conducted at 12:00 p.m. Thursday, March 7, 2019 at the Bailey-Kirk Funeral Home in Princeton with Pastor Derrick Cowan, officiating. Interment will follow at Fairview Cemetery at Bicknal Flats. Memorial contributions may be made to Lashmeet Freewill Baptist Church. The family will receive friends Thursday, March 7, 2019 from 11:00 a.m. until service hour at the Bailey-Kirk Funeral Home in Princeton. Online condolences may be shared with the family at www.bailey-kirk.com.

The family of Jim Cook created this Life Tributes page to make it easy to share your memories.

Send flowers to the Cook family.