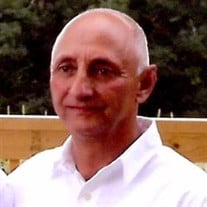 ROCK – Jerry Pugalee, 69, of Rock, met his Heavenly Father on Thursday, June 17, 2021. Born November 25, 1951 in Princeton, he was the son of the late Louis Pugalee and Magie Ruth O’Dell Pugalee. Jerry was a 1968 graduate of Matoaka High School and proudly served in the US Navy from 1969-1973. He was a coal miner for 26 years and was a member of the UMWA. He was a dedicated member of Bible Baptist Church in Lashmeet and loved the Lord. He enjoyed his garden and his horse and loved spending time with his grandchildren. In addition to his parents, he was preceded in death by siblings, Ricky Pugalee, Chucky Pugalee, Jackie Pugalee and Connie Pugalee. Those left to cherish his memory include his wife of 46 years, Cheral Cooper Pugalee; sons, Jerry Pugalee, Jr. and Jason (Frank) Pugalee and wife Kayla of all of Lashmeet; grandchildren, Caitlin Pugalee Justice of Princeton, Kiera Pugalee and Ethan Pugalee both of Tazewell, VA and Derrick White and Alden Pugalee both of Lashmeet; and siblings, Nancy Howerton of Lake Bottom, Darlene Hillman of Tallahassee, FL and Pat Harmon and David Pugalee both of Charlotte, NC. Funeral services will be conducted at 12:00 p.m. Tuesday, June 22, 2021 at the Bailey-Kirk Funeral Home in Princeton with Pastor Jimmy Cecil officiating. Interment will follow at Roselawn Memorial Gardens in Princeton where military honors will be conducted by the Mercer County Veterans Honor Guard. The family will receive friends Monday, June 21, 2021 from 6-8 p.m. at the Bailey-Kirk Funeral Home in Princeton. To view a video tribute to Jerry, or share condolences with the family, please visit www.bailey-kirk.com.

The family of Jerry Pugalee created this Life Tributes page to make it easy to share your memories.

Send flowers to the Pugalee family.