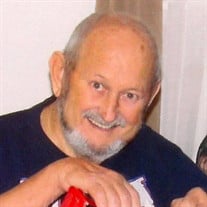 PINOAK – Jerry Wayne Meadows, Sr., 79, of Pinoak, passed away Wednesday, March 17, 2021 surrounded by his loving family. Born March 7, 1942 in Springton, he was the son of the late Oley Meadows and Loma Bartrum Meadows. Mr. Meadows attended Matoaka High School and later joined the Army National Guard. He was a retired coal miner for CONSOL Energy, where he worked enthusiastically at the Wenonah, Turkey Gap and Amonate mine locations. Jerry was an avid outdoorsman and enjoyed making memories with his family and friends. He enjoyed camping with his wife and family. He loved his family deeply and cherished the time he spent with each of them. His warm, welcoming smile was a trademark trait that will always be remembered. Mr. Meadows loved the Lord, his faith was his cornerstone. He was a faithful member of Rock Pentecostal Church in Rock. In addition to his parents, he was preceded in death by brother, Bernard Meadows; sister, Esther O’Dell; and his beloved mother-in-law, Wilma Ray. Left to cherish his memory include his devoted wife and companion of 57 years, Nancy Meadows; children, Melissa Matherly and husband Mike of Speedway, Jerry Meadows, Jr. and wife Sarah of McRoberts, KY, Kevin Meadows and wife Belinda of Pinoak and Keith Meadows and wife Misty of Princeton; brother, Paul Meadows of Barboursville; six grandsons; nine great grandchildren. Funeral services will be conducted at 7:00 p.m. Tuesday, March 23, 2021 at the Bailey-Kirk Funeral Home in Princeton with his son, Rev. Keith Meadows, and Rev. Randy Cecil officiating. A graveside service will be conducted at 12:00 p.m. Wednesday, March 24, 2021 at Roselawn Memorial Gardens in Princeton with Military Honors by the Mercer County Veterans Honor Guard. Friends attending the graveside service are asked to meet at the Bailey-Kirk Funeral Home at 11: 45 a.m. The family would like to extend their heartfelt appreciation to the staff of Compassus Hospice Care for the outstanding services they provided during Jerry’s last days. The family will receive friends Tuesday, March 23, 2021 from 6:00 p.m. until service hour at the Bailey-Kirk Funeral Home in Princeton. To view a video tribute to Mr. Meadows, or share condolences with the family, please visit www.bailey-kirk.com. Please check back here after 6:00 p.m. on Tuesday to view a video memorial tribute to Mr. Meadows.

The family of Jerry Meadows Sr. created this Life Tributes page to make it easy to share your memories.

Send flowers to the Meadows family.