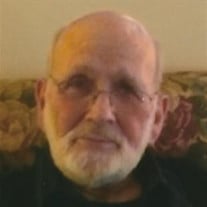 PRINCETON – Jerry Grogan, 86 of Princeton died Saturday, June 22, 2019. Born May 19, 1933 in Brasstown, NC he was the son of the late Riley “Spud” Grogan and Oma Hurst Grogan. Jerry was a dedicated member of Airport Road First Church of God where he was an Adult Bible Class teacher and had formerly served as Chairman of the Board of Trustees. He enjoyed visiting the members of the church and sharing his testimony. He was a veteran of the US Army and served in Germany as a cryptographer. He received numerous medals and honors. Jerry was a retired heavy equipment operator for US Steel and Consol. He also was a crane operator and helped build the East River Mountain and Big Walker Mountain tunnels. His passion was trout fishing and hunting. He loved his family dearly and family gatherings were very precious to him. In addition to his parents he was preceded in death by his son, J. D. Grogan, Jr.; infant grandson, Evan Hastings; son-in-law, David Walker and brother, Ronald Grogan. Survivors include his wife of 68 years, Rose Nell Tibbs Grogan; children, twin daughters Terri Walker of Princeton and Jerri Murphy and husband Dempsey of Princeton, Donnie Grogan and wife Angela of Princeton and Donna Hastings and husband Rick of Bluefield; nine grandchildren, twenty two great grandchildren; sister, Joyce Coldiron of Columbus, OH; special friends, Corbie Hounshell, Randy Bailey and Kevin Roberts; his church family and the Lashmeet Men’s Fellowship Group. Funeral services will be conducted at 1:00 p.m. Tuesday, June 25, 2019 at Bailey-Kirk Funeral Home with Pastor Dana Hambrick officiating. Interment will follow at Monte Vista Park Cemetery in Green Valley. Serving as pallbearers will be his grandsons, Scott Walker, Todd Murphy, Terrance Grogan, Greg Grogan, Chad Hastings and Aaron Hastings. Honorary pallbearers will be Mickey Hurst, Jack Hager, Randy Bailey and Kevin Roberts. Friends may visit from 12:00 p.m. until the service hour on Tuesday, June 25. Arrangements by Bailey-Kirk Funeral Home in Princeton. Online condolences may be sent to the family at www.bailey-kirk.com.

The family of Jerry Grogan created this Life Tributes page to make it easy to share your memories.

Send flowers to the Grogan family.