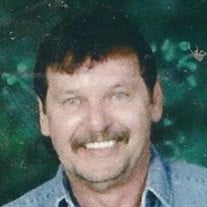 ROCK – Herman Edward “Hotrod” Johnston, 70, of Rock, died at his home Wednesday, November 10, 2021. Born December 13, 1950 at Page, he was the son of the late Homer Johnston and Delcie Hayes Johnston. Mr. Johnston refinished and painted cars. He enjoyed spending time with his grandchildren and sitting on the porch watching wildlife. He enjoyed traveling, hunting and fishing. He was well-loved by all who knew him and will be greatly missed. In addition to his parents, he was preceded in death by four sisters, Kathleen Tincher, Jean McNabb, Betty Wright and Joyce Butterworth; five brothers, Wilbur, Shelbren, Robert, Willard and Orville; several nieces and nephews, first wife, Shirley and mother of his children and second wife, Carolyn Sue. Survivors include his wife, Julie Brant Johnston; children, Angela Miller and husband David and Brian Johnston; step-sons, Michael Nowlin and Thomas Newman; brothers, Ralph Johnston and wife Crystal and Thomas Johnston all of Page; sister, Mary Hill of Lashmeet; grandchildren, Brittni, Desiree, Hunter, Trenton, Chloe and Logan; great grandchildren, Leanna, Braxton and Nevaeh; many nieces and nephews; and special friends, Libby Hylton and Tony Miller. The body has been cremated and a memorial service will be held at a later date. “His race was run, he fought a good fight, he kept the faith.” Arrangements by Bailey-Kirk Funeral Home in Princeton. Online condolences may be shared with the family at www.bailey-kirk.com.

The family of Herman Edward "Hotrod" Johnston created this Life Tributes page to make it easy to share your memories.

Send flowers to the Johnston family.