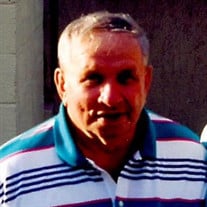 PRINCETON – Harold “Corky” King, 92, of Princeton, died Friday, June 10, 2022. Born January 4, 1930 in Springton, he was the son of the late John Everett King, Sr. and Gladys Holloway King. Corky joined the US Navy in 1950 and served during the Korean Conflict. He worked 37 years in the coal mining industry, with a majority of that time with US Steel mining company. He loved working in his garden and especially spending time with his family. In addition to his parents, he was preceded in death by his wife of 62 years, Barbara Jean Carden King; brothers, Junior King, Jimmy King, Freddy King, Manuel King and John King; and sister, Nellie Smallridge. Survivors include sons, Tommy King of Princeton and Harold King, Jr. and wife Misty of Johnson City, TN; sisters, Mildred Conner of Princeton and Barbara Vohsen of Arnold, MO; grandchildren, Vanessa Prudich and husband Justin of Bluefield, Allissa Brooks and husband Shawn of Clearwater, FL, Ashleigh Janutolo and husband Nick of Birmingham, AL and Jonathan King of Princeton; and great grandson, Gray Prudich of Bluefield. Funeral services will be conducted at 1:00 p.m. Tuesday, June 14, 2022 at the Bailey-Kirk Funeral Home in Princeton with Pastor C.T. Lilly officiating. Interment will follow at Resthaven Memorial Park in Princeton where military honors will be conducted by the Mercer County Veterans Honor Guard. The family would like to thank the nursing staff of Stonerise of Princeton. The family will receive friends Tuesday, June 14, 2022 from noon until service hour at the Bailey-Kirk Funeral Home in Princeton. To view a video tribute to Mr. King, or share condolences with the family, please visit www.bailey-kirk.com.

The family of Harold "Corky" King created this Life Tributes page to make it easy to share your memories.

Send flowers to the King family.