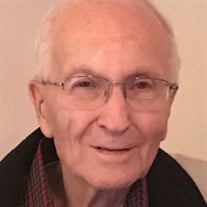 MULLENS – Harless Shrewsbury, 87, of Mullens, went to be with his Lord and Savior on Wednesday, March 31, 2021. Born April 17, 1933 in Arista, he was the son of the late Harry Harless Shrewsbury and Cora Monk Shrewsbury. Mr. Shrewsbury was an honorable veteran of the US Army, in which he served overseas. He spent his entire career working for Westmoreland Coal Company in Itmann. As a devout Christian, he proudly was a member of Otsego Bible Chapel for many years. In addition to his parents, he was preceded in death by his loving wife, Sonia (Parker) Shrewsbury, whom he has missed every day since her departing; brothers, Jack and Carl Shrewsbury; and sister, Alice White. Survivors include his loving nephew and family who cared for him and with whom he spent holidays since the passing of his wife, are Scott Parker and wife Kim, and their children, Kaitlyn Parker (“Katie Grace” as Harless referred to her) and Chandler Parker all of Lake Norman, NC and Beckley and Cpl. Nicholas Parker of Beckley; beloved sister-in-law, Patty (Parker) Burrell of Princeton; and a host of wonderful neighbors and friends. We will never be able to repay Dr. Saad Zafar, D.O., Dr. John Tabit, M.D., Stephanie Hatcher, RN and the entire Orthopedic Nursing Staff at Raleigh General Hospital and Bowers Hospice House nursing staff for their loving care over the past month. In lieu of flowers, please consider a donation in Harless’ memory to Otsego Bible Chapel, P.O. Box 114, Mullens, WV 25882 or Bowers Hospice House, 454 Cranberry Dr., Beckley, WV 25801. A graveside service will be conducted at 12:00 p.m. Wednesday, April 7, 2021 at Roselawn Memorial Gardens in Princeton with Pastor Mike Endreson and Pastor John Morgan officiating. Military honors will be conducted by the Mercer County Veterans Honor Guard. Arrangements by Bailey-Kirk Funeral Home in Princeton. Online condolences may be shared with the family at www.bailey-kirk.com.

MULLENS &#8211; Harless Shrewsbury, 87, of Mullens, went to be with his Lord and Savior on Wednesday, March 31, 2021. Born April 17, 1933 in Arista, he was the son of the late Harry Harless Shrewsbury and Cora Monk Shrewsbury. Mr. Shrewsbury... View Obituary & Service Information