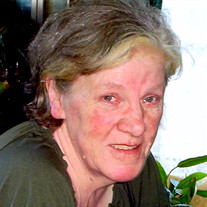 PRINCETON – Gertrud Hilda “Gerti” Tate, 72, of Princeton, was united with her husband of 48 years on the evening of Tuesday, May 22, 2018. Born September 1, 1945 in Mannheim, Germany, she was the daughter of the late Karl Barth and Maria Elisabeth Giebel Barth. Everyone called her Gerti. Born and raised in Germany, she grew up to be a tall redhead who worked as a bookkeeper in a local office. It was at a Mannheim fair in the spring of 1969 that she met Bill Tate. She thought that he was just another soldier trying to pick her up. When she spoke of their meeting, she would often say that she was amazed that she could put together enough English to tell him off. Luckily, he persisted and she eventually agreed to date. She loved that he was a gentleman and her eyes would shine when she recounted that he kissed her on the forehead at the end of their first date. Three months later they were married. They had two children while still in Germany: Christina in 1970 and William Jr. in 1972. Gerti began a new life in the United States when she and Bill moved their growing family to West Virginia in 1974, and in 1975 their final child, Elisabeth, competed the family. Gerti worked as a waitress, mostly at Omelet Shoppe in Princeton, West Virginia for the better part of 32 years. She was a born people person and enjoyed meeting every person that came through the doors. She served burgers and kindness. She filled coffee cups and hearts. She saved countless lives by hiding keys and sobering customers up. She made sure that everyone was fed, even if she had to help them with a few bucks. There was no need for judgement or shame. She understood that sometimes a little help was needed. She truly treated everyone with dignity and respect. She knew everyone; police officers, firefighters, nurses, doctors, bartenders, exotic dancers, truck drivers, coal miners, college professors and the list goes on. Her college kids would come in and she’d keep their coffee cups filled while they sat studying in the corner of her station. Years later, those same “kids” would bring their own freshman children to meet her. She made countless baby blankets for her customers and loved receiving Christmas cards with family pictures from near and far. She loved meeting people by chance when she was shopping and would be greeted by everyone. Everyone knew Gerti. Gerti loved crocheting and professional wrestling. She enjoyed traveling and collecting postcards. She loved sweets, especially cheesecake and coffee. She was a loving mother and grandmother, a faithful wife and a loyal friend. She did the best she could with what she was given in life. She was blessed and knew it which made her doubly blessed. She will be remembered as an incredible human being. In addition to her parents, she was preceded in death by her husband, William H. Tate; father-in-law, Joseph E. Tate; mother-in-law, Antoinetta Tate; and her sister, Marie-Luise Barth. Survivors include daughter, Christina Tate-Noecker and husband Joerg of Princeton; son, William H. Tate, Jr. and wife Alicia of Princeton; daughter, Elisabeth Tate-Collin and husband Edward of Columbus, OH; brother, Fritz Barth; four grandchildren, Adia Hayes, Quinlan McKenzie, Nicholas Noecker and Zan Collin; additional chosen family, Stephen Hayes and Ryan McKenzie; special friend, Glen Angelle; in-laws, Joe Tate, J.C. Tate, Elvin Tate, Cheche Casto, Bob Tate, Charlotte Tellez, Muesetta Holbert and Dillard Tate; and countless nieces and nephews. Rite of Christian Burial will be conducted at 2:00 p.m. Saturday, May 26, 2018 at the Bailey-Kirk Funeral Home in Princeton with Deacon Don Hammond officiating. Interment will follow at Oakwood Cemetery in Princeton. A reception will follow at the CASE family center, 205 Thorn Street, Princeton. The family will receive friends Saturday, May 26, 2018 from noon until service hour at the Bailey-Kirk Funeral Home in Princeton. To view a video tribute to Gerti, or share condolences, please visit www.bailey-kirk.com. Please check back here after 1:00 p.m. on Saturday to view a video memorial tribute to Gerti.

The family of Gertrud "Gerti" Tate created this Life Tributes page to make it easy to share your memories.

Send flowers to the Tate family.