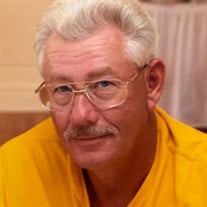 PINOAK – Gerald Shrewsbury, 66, of Pinoak, died Sunday, March 15, 2020. He was the son of the late Carnes Oakley Shrewsbury and Virginia Aileen Gladwell Shrewsbury. 2 Corinthians 5:8 To be absent from the body is to be present with the Lord. Gerald has made his trip to see his heavenly Father and his beloved family. Some of his beloved family and friends have been there without him to wait for our turn. Until then he will be missed every day. Gerald was a member and Sunday school teacher at Calvary Baptist Church in Lake Shawnee. He worked in the coal mines for 30 years and retiring at Alpha mines in 2016. Gerald was an outdoorsman who loved to hunt, fish, camp and ride his side by side in the country. He was a man who loved his family and wanted to spend time with them more than anything. In addition to his parents, he was preceded in death by brothers, Ernest Shrewsbury and Curtis Shrewsbury; sisters, Elvia McKinney and Shirleen Cordle; niece, Rema Martin; brothers-in-law, Johnny Monk and Bert McKinney; and sisters-in-law, Carol Shrewsbury, Gaye Shrewsbury and Anita Shrewsbury. Survivors include his wife, Vivian Shrewsbury; daughters, Nancy Wood and husband Dave of Florida, Sherry Shrewsbury and Terry Shrewsbury both of Princeton and Tammy Nicholson and husband Darrell of Lashmeet; son, Keith Mitchelson and wife Kelly of Bent Mountain; brothers, Darrell Shrewsbury and wife Deborah of Reese Harmon, Mason Shrewsbury of Elkton, MD, Roger Shrewsbury of Bluefield, Ronnie Shrewsbury and wife Renee of Princeton and Larry Shrewsbury and wife Drema of Lake Shawnee; sisters, Sharon Shrewsbury of Christiansburg, VA and Freda Covel and husband Ron of Reese Harmon; grandchildren, Timmy, Ray, Andrea, Leanna, Hunter and Brook; and four great grandchildren. Funeral services will be conducted at 1:00 p.m. Thursday, March 19, 2020 at the Bailey-Kirk Funeral Home in Princeton with Rev. Gary Raulerson officiating. Interment will follow at the Shrewsbury-Akers Cemetery at Arista Mountain. Serving as pallbearers will be Todd Shrewsbury, Patrick Shrewsbury, Kenny Monk, Ricky Monk, Wayne Monk, and Eric Shrewsbury. The family will receive friends Thursday, March 19, 2020 from noon until service hour at the Bailey-Kirk Funeral Home in Princeton. Online condolences may be shared with the family at www.bailey-kirk.com.

PINOAK &#8211; Gerald Shrewsbury, 66, of Pinoak, died Sunday, March 15, 2020. He was the son of the late Carnes Oakley Shrewsbury and Virginia Aileen Gladwell Shrewsbury. 2 Corinthians 5:8 To be absent from the body is to be present with the... View Obituary & Service Information

The family of Gerald Shrewsbury created this Life Tributes page to make it easy to share your memories.