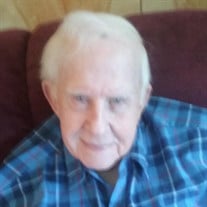 SHADY SPRING - George Garnet Shrewsbury, 97, passed away Monday, March 30, 2020, in Beckley, WV. Beloved Dad, Papa, brother, uncle, and cousin, he will be sorely missed by all who knew him. George was born July 18, 1922 to Cecil C. Shrewsbury and Blanche Foley Shrewsbury at their home in Beeson, WV. In addition to his parents, he was preceded in death by sisters, Ruby, Velda, Wanda Faye and Jean; one brother, Lotie; wives, Margaret Boothe Shrewsbury and Tina Perry Shrewsbury; infant daughter, Judy Ellen; and son-in-law, George Terlizzi. Survivors include daughter, Nancy Shrewsbury Terlizzi, of Shady Spring, WV; grandchildren, George Terlizzi II (Robin) of Charlotte, NC; John Eric Terlizzi (Dolly) of Raleigh, NC; April Terlizzi of Durham, NC; great-grandchildren, David Terlizzi, Chloe Terlizzi, Sarah Terlizzi, and Sophia Terlizzi; two sisters, Naoma Taylor and Janice Gullion both of Kegley, WV; and numerous nieces and nephews. George proudly served in the United States Army Signal Corps during World War II under General George Patton in the European Theater of Operations. In addition to the rank of Sergeant, he earned numerous commendations during his service from 1942-1946. At the end of the war, his unit entered Dachau Concentration Camp to observe and report on conditions. Upon returning to civilian life, he worked as a mine foreman by day and obtained an associate’s degree in business administration at Beckley College by night. His business career began in Charleston, WV as a salesman at Capitol Paper Supply. He later worked as the manager of Crown Supply Company in South Charleston, WV. In 1969 he founded Anchor Supply in Bluefield, WV, and later moved the business to Central Avenue in Charleston, WV. He retired from Anchor Supply’s Dunbar location at the age of 90. George served as Commander of the Veterans of Foreign Wars in St. Albans, WV, and was an active member of Kanawha County Young Democrats, and the Loyal Order of the Moose. Since his teen years, George was known for his amazing skill as a dancer. He also enjoyed researching family history, farming and tinkering with his cars. His family and friends will miss his engaging stories. A private graveside service will be held at the Shrewsbury Cemetery, Beeson, WV. Military Honors will be conducted by the Mercer County Veterans Honor Guard. Due to the current health crisis, a celebration of life will be planned in the future. Arrangements by Bailey-Kirk Funeral Home in Princeton. Online condolences may be shared with the family at www.bailey-kirk.com.

The family of George Garnet Shrewsbury created this Life Tributes page to make it easy to share your memories.