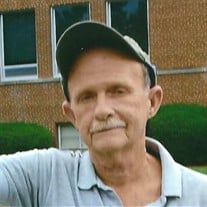 PRINCETON – Freddie (Bobo) Bailey,72 passed away in Princeton on November 7, 2018. He was born in Princeton to the late Curtis Bailey and Mary Caldwell Bailey as one of fifteen children. He proudly served in the US Army during the Vietnam War and was a longtime employee of Pounding Mill Quarry. Bo was an avid gardener, always wide open, and constantly looking for his next project to complete with one of his many "toys" (especially his excavator). He enjoyed spending time with “Shiloh” (his beloved horse) and his cats. Known for his generosity and unselfishness he was always willing to help friends and family. With his dry sense of humor, he enjoyed sharing stories (and tall tales) with his numerous nieces and nephews hoping to make them laugh and smile. “If it wasn't for bad luck, I wouldn't have any luck." In addition to his parents he was preceded in death by four brothers, Curtis "Eddie" Bailey, James Dale Bailey, David Wayne Bailey and Roger Lee Bailey; one sister Sharon Wheeler; brother-in-law, Larry Thorn and nephew John Curtis Espinola. He is survived by two brothers, Robert Bailey and wife Deborah of Princeton and Michael Bailey of Princeton; seven sisters, Patricia Bailey and husband Wayne Linkous of Asheboro, NC, Connie Espinola of St. Petersburg, FL, Cynthia Bailey of Chester, SC, Betty Thorn of Asheboro, NC, Sandra Guill of Princeton, Debra Lawing of Princeton and Melissa Laign and husband John of Pittsboro, NC; sister-in-law Sara Tibbs Bailey of Lashmeet; nieces and nephews, Dwayne and Leslie Bailey of Princeton, Brian Bailey of Princeton, Heather and Shane Cox of Asheboro, NC, Shannon and Danny Honaker of Princeton, Jeremy and Alyson Guill of Chapel Hill, NC, Evan Bailey of Pearisburg, VA, Alex Bailey of Princeton, Ashley Bailey of Richburg, SC, Justin Bailey of Princeton, Derek Wheeler of St. Petersburg, FL, Bryan Bailey of Bluffton, SC, Kimberly Lawing of Fort Lawn, SC and Jessica Laign of Pittsboro, NC; numerous great nieces, nephews and extended family and special friends Melissa Baker and family. Funeral services will be conducted at 1:30 p.m. Sunday, November 11, 2018 at the Bailey-Kirk Funeral Home with Rev. Larry Dyer officiating where military honors will be conducted by Mercer County Veterans Honor Guard. Interment will follow at Roselawn Memorial Gardens in Princeton. Friends may visit with the family from 12:30 p.m. until the service hour. Arrangements by Bailey-Kirk Funeral Home in Princeton. Online condolences may be sent to the family at www.bailey-kirk.com.

PRINCETON &#8211; Freddie (Bobo) Bailey,72 passed away in Princeton on November 7, 2018. He was born in Princeton to the late Curtis Bailey and Mary Caldwell Bailey as one of fifteen children. He proudly served in the US Army during the Vietnam... View Obituary & Service Information

The family of Freddie (Bobo) Bailey created this Life Tributes page to make it easy to share your memories.

Send flowers to the Bailey family.