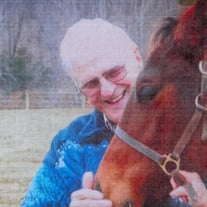 ROANOKE, VA - Rev. Fred Talmadge Toney, 90, of Roanoke, Virginia, son of Albert and Vercil Toney, departed this earthly home for the “big house” on Wednesday, June 8, 2022. Toney, as he liked to be called, was born May 17, 1932 at the farm of his grandparents, and the infant, not expected to live, grew into a strong young man who became center guard of his Athens High School basketball team, which in 1950, won the WV State Championship. He attended Concord College on a basketball scholarship, but after a short time there he felt his calling in life was to enter the ministry, so in 1952 he entered Johnson Bible College in Knoxville, TN, and from there he began his lifelong dream of being a minister. He pastored churches in West Virginia, Tennessee, Illinois, Virginia and Oklahoma. He also preached in revivals anywhere he was called, as his passion was to reach as many in need as he could. Rev. Toney loved the outdoors. Hunting and fishing were his favorite pastimes. He also loved his dogs and his beloved Arabian horses. His most cherished though were his many loyal friends over the years. He is survived by his three daughters Connie Toney of Lerona, Dana Harlor and her husband Bill of Moneta, VA and Patty Toney of Hope Mills, NC; and son Tim Toney and his wife Trish of El Dorado, KS. Also surviving are his six grandchildren Celestial Trigg, Ericka Hallis, Brian Harlor, Erin Spradling, Amber McClaren, and TR Toney as well as his fourteen great grandchildren and his three great, great grandchildren. Funeral services will be conducted at 11:00 a.m. Monday, June 13, 2022 at Bailey Kirk Funeral Home in Princeton with Rev. Jim Mullens officiating. Interment will follow at Roselawn Memorial Gardens in Princeton. The family wishes to thank the caring staff of South Roanoke Nursing Home in Roanoke who provided care these past three years. The family will receive friends Monday, June 13, 2022 from 10:00 a.m. until service hour at the Bailey-Kirk Funeral Home in Princeton. Online condolences may be shared with the family at www.bailey-kirk.com.

The family of Rev. Fred Toney created this Life Tributes page to make it easy to share your memories.

Send flowers to the Toney family.