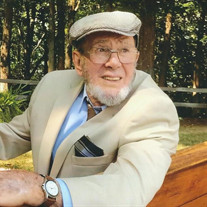 PRINCETON – Fred (Gene) Roland, 85, of Princeton passed away Thursday, November 22, 2018. Born April 28, 1933 in Bluefield he was the son of the late Fred Otto Roland and Ruby Starling Roland. He graduated from Beaver High School, which is now Bluefield High School, and MCTEC. He was a former member of the PMCCC and West Virginia Nurserymen Association. After graduating from high school he entered his family business, Roland’s Feed and Hardware Stores located in Bluefield and Princeton. He worked for The Pepsi-Cola Company for seventeen years and retired from there in 1994. After retiring from Pepsi he, along with his step-son David Thompson, organized Roland’s Inc. a full service landscaping company and commercial greenhouses. Gene always had a smile for everyone and never met a stranger. He was always willing to help anyone. He was a member of Maranatha Baptist Church in Princeton where in his younger days served as deacon and was involved in the Bus Ministry. In addition to his parents he was preceded in death by a daughter, Sharon Spencer and a step-son, David Thompson. Survivors include his wife, Carol Louise Lilly Roland; son, Alvin Roland: daughters, Cathy Burnopp, Lisa Roland, Angie Roland and Tammy Woodrum. A graveside service will be conducted at 11:00 a.m. Monday, November 26, 2018 at Roselawn Memorial Gardens Mausoleum in Princeton with Pastor Marvin Mills, officiating. Friends attending the graveside service are asked to meet at the mausoleum. Friends may visit with the family from 4-6 p.m. Sunday, November 25 at Bailey-Kirk Funeral Home. In lieu of flowers, if desired, contributions may be made to Maranatha Baptist Church Building Fund, 314 Oakvale Road, Princeton, WV 24740. Arrangements by Bailey-Kirk Funeral Home in Princeton. Online condolences may be sent to the family at www.bailey-kirk.com.

PRINCETON &#8211; Fred (Gene) Roland, 85, of Princeton passed away Thursday, November 22, 2018. Born April 28, 1933 in Bluefield he was the son of the late Fred Otto Roland and Ruby Starling Roland. He graduated from Beaver High School, which... View Obituary & Service Information

The family of Fred (Gene) Roland created this Life Tributes page to make it easy to share your memories.

Send flowers to the Roland family.