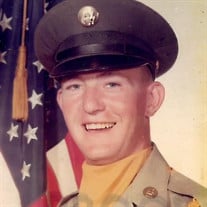 PRINCETON – Elbert “Junior” O’Dell, 72, of Princeton, died Tuesday, March 26, 2019. Born April 30, 1946 at McComas, he was the son of the late Tracy O’Dell and Edith Harris O’Dell. Mr. O’Dell was a veteran of the Army National Guard. He was a former coal miner for Consolidated Coal Co. and owner and operator of O’Dell’s Texaco in Matoaka. He was a member of Kegley Baptist Church. He was an automobile enthusiast and liked working on cars. He enjoyed watching westerns and spending time with his dogs, Taz, Chachi and Heidi. He loved his grandchildren and enjoyed watching them in sports and activities. In addition to his parents, he was preceded in death by sister, Freda Hatfield; and brothers, Ricky O’Dell and Randy O’Dell. Survivors include his wife, Wilma O’Dell; children, Shelia Otey and husband Gerald of Princeton, Rex O’Dell and wife Carla of Princeton and Greg O’Dell and wife Laurie of Speedway; grandchildren, Ashton, Lexie, Kylee, Dustyn, Madison and Sophie May; brother, Steven O’Dell of Princeton; sisters, Carolyn Woolwine of Princeton, Bonnie Steelwagon and husband Bill of Fairfax, VA and Lou Ann Walker and husband Charlie of Whitesville, KY; and special friends, Billy Linkous and Sonny Green both of Princeton. Funeral services will be conducted at 7:00 p.m. Thursday, March 28, 2019 at the Bailey-Kirk Funeral Home in Princeton with Rev. Stanley Metz and Rev. Rick Setser officiating. Entombment will be at 11:00 a.m. Friday, March 29, 2019 at Resthaven Memorial Park Mausoleum in Princeton where military honors will be conducted by the Mercer County Veterans Honor Guard. Friends attending the entombment are asked to meet at the funeral home at 10:45 a.m. Serving as pallbearers will be Rick Coburn, Kevin McMillion, Billy Linkous, Sonny Green, Eric Jones, and Chris Quesenberry. The family will receive friends Thursday, March 28, 2019 from 6:00 p.m. until service hour at the Bailey-Kirk Funeral Home in Princeton. Online condolences may be shared with the family at www.bailey-kirk.com.

The family of Elbert "Junior" O'Dell created this Life Tributes page to make it easy to share your memories.

Send flowers to the O'Dell family.