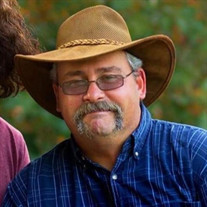 KEGLEY – Edward Lee Horton, 49, of Kegley, died Friday, June 19, 2020. Born September 29, 1970 at Kegley, he was the son of Charles Wells of Princeton and Patricia Brewster Wells Horton of Princeton. He was preceded in death by his adoptive father, Ronald Horton. Ed was a graduate of Hargrave Military Academy in Chatham, Virginia where he played the trumpet. He served in the US Army in Panama. He was a talented musician and played the piano and trumpet. He played and sang at many church services and weddings. During the past 20 years, Ed was formerly employed by 911, served on the Princeton and Bluefield Rescue Squads and voluntarily served on the Bluestone Valley Fire Dept. He was a member of Team Chevy in the NASCAR circuit, in which he hauled and set up Team Chevy displays for such drivers as Jimmy Johnson. He was currently employed by Berry Iron and Metal in Chilhowie, Virginia. He enjoyed his work and loved his crew. Ed’s passion was oval dirt track racing and drove car #1 in the mini stock and truck division. He raced at Beckley Motorsports Park, which is an organization that supports foster children. He enjoyed being promotor for the race track. Kids knew Ed’s heart. A young man, Cameron Bolton, recognized Ed’s heart and a forever friendship grew. Cam’s mother and sister always appreciated Ed and loved him from the start. Ed was a man of faith and maintained his spiritual relationship. He never met a stranger and considered his friends as family. Survivors include his wife of nine years, Carrie Bailey Horton; two children to whom he was a wonderful father and role model, Sierra Leann Lusk and Nicholas Walter Allen Lusk; godson, Alex Stacy; three half-brothers, Timothy Wayne Horton of Michigan, Patrick Neil Horton of Appomattox, VA and Aaron Wells of Gadsden, AL; one half-sister, Ashley Taylor and her husband Kent of Beckley and their children, Gracie, Ethan and Khloe; cousin, Ashley Brewster and his wife Emily of Kegley and their children, Wyatt and Taylor; favorite aunt, Linda Brown of Princeton; and uncle, Davis Brewster of Kegley. Funeral services will be conducted at 10:00 a.m. Saturday, June 27, 2020 at the Bailey-Kirk Funeral Home in Princeton with Rev. Robby Shorter officiating. Interment will follow at Resthaven Memorial Park in Princeton where military honors will be conducted by the Mercer County Veterans Honor Guard. The family will receive friends Friday, June 26, 2020 from 6-8 p.m. at the Bailey-Kirk Funeral Home in Princeton. To view a video tribute to Ed, or share condolences with the family, please visit www.bailey-kirk.com.

KEGLEY &#8211; Edward Lee Horton, 49, of Kegley, died Friday, June 19, 2020. Born September 29, 1970 at Kegley, he was the son of Charles Wells of Princeton and Patricia Brewster Wells Horton of Princeton. He was preceded in death by his adoptive... View Obituary & Service Information

The family of Edward Horton created this Life Tributes page to make it easy to share your memories.

Customized sympathy cards. Mailed for you.