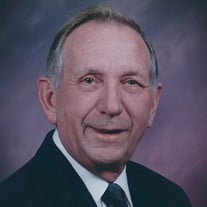 PRINCETON – Donald Homer Pruett, 79, of Princeton, died Thursday, February 15, 2018. Born March 27, 1938 in Tazewell, VA, he was the son of the late Robert Homer Pruett and Margaret Kitts Pruett. Mr. Pruett was an employee of Carter Machinery in Bluefield for 43 years. He worked as a mechanic and salesperson his entire career. He was a member of the Princeton Elks Lodge, Princeton Moose Lodge, Masonic Lodge #134, Bluefield Shrine Club, Eastern Star and Air Stream Club. He was an avid hunter and fisherman. He loved spending time with his grandchildren. In addition to his parents, he was preceded in death by his wife, Sylvia Pruett. Survivors include two sons, Cy E. Pruett of Cool Ridge and Timmie Lee Pruett and girlfriend, Joy Bell of Princeton; one sister, Linda Hayes of Youngsville, NC; two grandsons, Tyler Uriah Pruett and Trevor Daniel Pruett; and his special friend, Ann Shrewsbury. Funeral services will be conducted at 1:00 p.m. Monday, February 19, 2018 at the Bailey-Kirk Funeral Home in Princeton with the Rev. Ed Pettus officiating. Entombment will follow at Roselawn Memorial Gardens Mausoleum in Princeton where Masonic Rites will be conducted by the Princeton Masonic Lodge #134 and Military Honors will be conducted at the Mercer County Veterans Honor Guard. In lieu of flowers, memorial contributions may be made to Princeton Presbyterian Church, 1809 West Main Street, Princeton, WV 24740. The family will receive friends Monday, February 19, 2018 from noon until service hour at the Bailey-Kirk Funeral Home in Princeton. Online condolences may be shared with the family at www.bailey-kirk.com.

The family of Donald Pruett created this Life Tributes page to make it easy to share your memories.

Send flowers to the Pruett family.