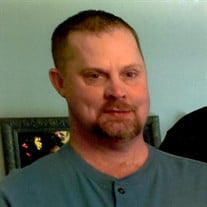 BEESON – Carlos Daniel “Big Dawg” Shrewsbury, Jr., 46, of Beeson, died Friday, January 24, 2020, at his home, of an apparent heart attack with his beloved cat Levi by his side. Born February 24, 1973 in Bluefield, he was the son of Daniel and Janet Ayers Shrewsbury of Princeton. Daniel was a 1992 graduate of Matoaka High School. He was an avid WVU Mountaineer fan and a diehard PikeView Panthers fan. He could liven up any PikeView game he attended. Players and fans loved to see him come to the games. He coached little league ball at the Princeton Rec Center and was so proud of the kids on his team. He loved the outdoors and will be forever known for his sense of humor, friendliness, laughter and his heart of gold. He loved talking politics to anyone that would listen. He was preceded in death by his paternal grandparents, Paul and Opal Shrewsbury; and his maternal grandparents, Leonard and Anna Ayers. In addition to his parents, survivors include sister, Lisa Shrewsbury of Princeton; nieces, Breanna and Megan Goins whom he loved dearly; aunts and uncles, Glenda and Larry Bailey, Wayne and Elizabeth Ayers, Lila and Virgil Shrewsbury, Pam Nicewander, Virginia and Manual Lusk, Jeffery and Linda Shrewsbury and Rhonda and Rod Wagner; many cousins whom he grew up with; special friends, Scottie Coomes, Heather Brown and children, Eli and Avannah; and his beloved cat, Levi. Funeral services will be conducted at 1:00 p.m. Tuesday, January 28, 2020 at the Bailey-Kirk Funeral Home in Princeton with Pastor Anthony Shrewsbury and Rev. Jerry Heaton officiating. Interment will follow at Oakwood Cemetery in Princeton. Everyone is encouraged to wear Mountaineer colors to the service in his memory. Serving as pallbearers will be Scottie Coomes, Jamie Lusk, Willie Owens, Jeffery Shrewsbury, Jr., Wayne Ayers, Allen Wiblin and Mike Bailey. The family will receive friends Tuesday, January 28, 2020 from noon until service hour at the Bailey-Kirk Funeral Home in Princeton. To view a video tribute to Daniel, or share condolences with the family, please visit www.bailey-kirk.com.

The family of Daniel "Big Dawg" Shrewsbury Jr. created this Life Tributes page to make it easy to share your memories.