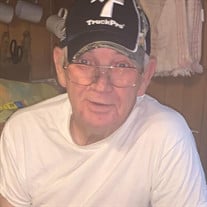 MATOAKA – Daniel S. “Buddy” Breeden, Sr., 78, of Matoaka, died Friday, September 3, 2021 after a short battle with cancer. Born September 1, 1943 in Lamar, he was the son of the late Elijah Daniel Breeden and Hazel Annie Hudgins Breeden. Buddy was a former coal miner at Eastern Coal #2 at Herndon where he was a roof bolter. He was a member of the UMWA and was of the Baptist faith. He was an outdoorsman and enjoyed riding motorcycles and spending time with his grandchildren and great grandchildren. In addition to his parents, he was preceded in death by his wife, Ilean Bailey Breeden; three brothers, Jerry, Barry and George; and four sisters, Lottie, Velma, Cathy and Nettie. Survivors include one son, Daniel Breeden, Jr. of Matoaka; two daughters, Trena Linkous and husband Gary of Hiawatha and Connie Shrewsbury and husband Harold of Spanishburg; two sisters, Margaret Williams of Greensboro, NC and Maxine Gibson of Georgia; six grandchildren, Danielle Damewood and husband Jordan, Tanner Ratcliff, Daryn Harmon and fiancée Korin, Victoria Breeden, R.J. Linkous and wife Afton and Amanda Shrewsbury and fiancé Daniel M.; and six great grandchildren, Tyler, Emma, Lillian, Dalton, Jailean and Jesse. A graveside service will be conducted at 1:00 p.m. Tuesday, September 7, 2021 at Roselawn Memorial Gardens in Princeton with Rev. Larry Dyer officiating. Friends attending the service are asked to meet at the cemetery in Trinity Gardens. Arrangements by Bailey-Kirk Funeral Home in Princeton. Online condolences may be shared with the family at www.bailey-kirk.com.

The family of Daniel S. Breeden Sr. created this Life Tributes page to make it easy to share your memories.

Send flowers to the Breeden family.