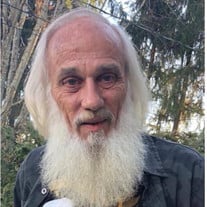 PRINCETON – Claude Allen “Bossie” Tilley, 69 of Princeton died Thursday, August 13, 2020. Born December 14, 1950 in Princeton he was the son of Janie Lucille Tucker Tilley of Lashmeet and the late Elmer Tilley. Claude was a 1969 graduate of Matoaka High School, of the Christian faith and a veteran of the U. S. Navy stationed in California. He retired from Conn-Weld in Princeton where he worked as a welder and fabricator. Some of his greatest joys in life were family gatherings at his mom’s house and going to the family farm. Claude especially loved spending time with his kids and grandkids. He loved cars and enjoyed working on them. In addition to his father he was preceded in death by a daughter, Brittany Nicole Tilley and infant son, Claude Allen Tilley, Jr. In addition to his mother he is survived by three children, Michael Allen Tilley and wife Cassie of Princeton, Jenefer Tilley Walters of Lashmeet and Miranda Lynn Thornton and husband Brian of Princeton; his former spouses and mothers of his children, Abby Thompson Gillis, Erika Spaulding and Belinda Tilley Brewster; grandchildren, Elijah Allen Tilley, Allyson Maria Tilley, Kaylie Taylor, Bentley Walters, Jeremiah Walters and Noah Matteus Thornton; siblings, Elmer Bruce Tilley of Lynchburg, VA, Margaret Gillenwater and husband Willis of Lashmeet, Carolyn Blankenship and husband Joel of Lashmeet and Sandra Moye of Milton; many nieces and nephews and his dog and best buddy, Little Feller. Funeral service will be at 2:00 p.m. Tuesday, August 18, 2020 at Resthaven Mausoleum Chapel in Princeton with Rev. Gary Raulerson officiating. Interment will be at Oakwood Cemetery in Princeton. Military honors will be conducted by the Mercer County Veterans Honor Guard. Arrangements by Bailey-Kirk Funeral Home in Princeton. To view a video tribute or send the family online condolences please visit www.bailey-kirk.com.

The family of Claude Allen Tilley created this Life Tributes page to make it easy to share your memories.

Send flowers to the Tilley family.