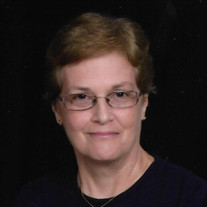 PRINCETON – Carol Jean Rose, 66, of Princeton, died Monday, September 20, 2021. Born March 30, 1955 in Bluefield, she was the daughter the late Howard Walker and Betty Winfrey Walker. Mrs. Rose received an AS in Secretarial Science from Bluefield State College. She received an LPN from Mercer County Vocational Center, an AS in Nursing from the University of New York, and a BS in Nursing from Bluefield State College. Mrs. Rose was a former employee of Nova Care in Princeton and worked at Princeton Community Hospital from 1994-2009. She was a member of Sigma Beta Tau and Tau Delta Honor Sorority. She enjoyed sewing, cross stitching, reading and especially spending time with her 7 grandchildren and 2 dogs, Joy and Hope. She was a member of Johnston Chapel in Princeton. In addition to her mother and father, she was preceded in death by her husband, James “J.R.” Rose. Survivors include two sons, Eric Walker and wife Amy of Hampton, VA and Jonathan Walker of Princeton; brothers, Rodger Walker and wife Debbie of Rockwall, TX, Steve Walker of Midlothian, VA, Scott Walker and wife Beverly of Wytheville, VA and Chuck Walker and wife Judy of Danielsville, GA; grandchildren, Josiah, Levi, Grace, Noah, Abigail, Isaac and Salena; and a multitude of nieces and nephews. Funeral services will be conducted at 11:30 a.m. Friday, September 24, 2021 at Johnston Chapel Baptist Church in Princeton with Pastor Dan Thyng and Pastor Jim Simmons officiating. Interment will follow at Roselawn Memorial Gardens in Princeton. In lieu of flowers, monetary donations can be made to Johnston Chapel. Arrangements by Bailey-Kirk Funeral Home in Princeton. The family will receive friends Friday, September 24, 2021 from 10:30 until service hour at Johnston Chapel Baptist Church. Online condolences may be shared with the family at www.bailey-kirk.com.

The family of Carol Rose created this Life Tributes page to make it easy to share your memories.

Send flowers to the Rose family.