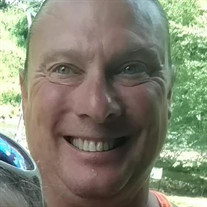 LASHMEET – Bruce Fay, 55, of Lashmeet, died Monday, September 16, 2019 as a result of a motorcycle accident. Born September 1, 1964 in Rochester, NY, he was the son of Michael Zane Fay, Jr. and Patricia Ann Cook Fay of Smethport, PA. Bruce had a joyous personality that was spread to everyone around him. He was loved by everyone who met him. Bruce enjoyed being outdoors and his true passion was riding his motorcycle. He embraced his Native American heritage in everything he did. When he decided to move to West Virginia five years ago with his wife, Cathy, he found peace within the community. He was known to many as “Smiley” because of his outgoing personality. In addition to his parents, survivors include his loving wife, Cathy Fay; five siblings, Kelly Fay Ladlee and husband Jim of Howard, PA, Shannon Michelle Fay of Mechanicsburg, PA, Kristi Nourse and husband Tom of Gainesville, VA, Ryan M. Fay of Gainesville, VA and Michael J. Fay and companion Lyndsey of Langhorne, PA; three step-children, Michael E. Rohrer and wife Heather, Angela L. Rohrer, and Jason Greene and wife Amber all of PA; eight grandchildren; and ten nieces and nephews. The body has been cremated. There will be no services at the funeral home. As a tribute to Bruce's memory, memorial contributions may be made to Bailey-Kirk Funeral Home and will be greatly appreciated by his family. Arrangements by Bailey-Kirk Funeral Home in Princeton. Online condolences may be shared with the family at www.bailey-kirk.com.

The family of Bruce Fay created this Life Tributes page to make it easy to share your memories.

Send flowers to the Fay family.