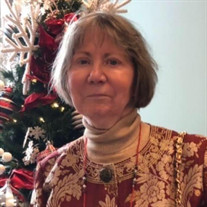 PRINCETON – Brenda Joyce Allen Owens, 73, of Princeton, died Thursday, June 11, 2020. Born January 19, 1947 in Matoaka, she was the daughter of the late George Leonard Allen, Jr. and Doris Webb Allen Morefield. Brenda graduated with a BS degree in Education from Concord College and later received her Master’s degree. She left the area and moved to Richmond, Virginia where she resided until 2015 when she returned to Princeton. She retired from the Virginia Department of Environmental Quality. She was a member of Carr Memorial United Methodist Church in Glenwood. Her faith was strong as she was dealing with a neurological condition for the past few years. She never complained and kept a positive outlook on life and everything she encountered. She loved growing up in Matoaka and kept in touch with her classmates over the years that she loved very much. In addition to her parents, she was preceded in death by her husband, Clyde Roland Owens, Sr. Survivors include brother, Barry Allen and wife Melva of Princeton; stepfather, Billy Morefield of Princeton; stepsons, C. Roland Owens, Jr. and wife Amy of Bridgewater, VA and Ryan Owens and wife Amie of Portland, OR; two step-grandchildren, Katy Owens and Cambria Owens; nephew, Dustin Allen; niece, Stacy Sheets; great-niece, Madison Sheets; special sister-in-law, Toby Brown and husband Ken of Boca Raton, FL; and special caregiver, Holly Meadows. Brenda will be interred in North Carolina beside her husband. A memorial service will be announced at a later date. In lieu of flowers, memorial contributions may be made to Carr Memorial United Methodist Church. Arrangements by Bailey-Kirk Funeral Home in Princeton. Online condolences may be shared with the family at www.bailey-kirk.com.

The family of Brenda Owens created this Life Tributes page to make it easy to share your memories.

Send flowers to the Owens family.