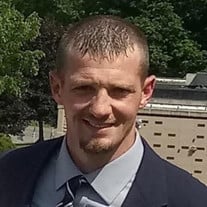 ATHENS – Billy Allen “Squil” White, 33, of Athens, died Friday, July 16, 2021. Born January 5, 1988 in Bluefield, he was the son of Brenda Cecil and the late Kevin Thomas White. Billy was a construction worker while his health permitted. He enjoyed reading the Bible, fishing and spending time with his family. He had a positive attitude and believed in never giving up. In addition to his father, he was preceded in death by his paternal grandparents, Bill and Susan White; maternal grandfather, Woody Cecil; and his father-in-law, Jack Hartwell. In addition to his mother, survivors include his wife, Candice Rodgriguez White; four children, Chasity, Gabby, Joshua and Destiny; maternal grandmother, Drama Cecil of Kegley; brother, Thomas Stacy and wife Kayla of Windmill Gap; mother-in-law, Carolyn Hartwell of Florida; and special aunt, Tina Cecil and other aunts, uncles, nieces, nephews and many friends who he considered brothers and sisters. A memorial service will be conducted at 3:00 p.m. Wednesday, July 21, 2021 at the Lashmeet Church of God with Pastor Gary Raulerson officiating. Arrangements by Bailey-Kirk Funeral Home in Princeton. Online condolences may be shared with the family at www.bailey-kirk.com.

The family of Billy White created this Life Tributes page to make it easy to share your memories.

Send flowers to the White family.