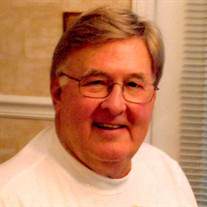 PRINCETON - William "Bill" Wilson, 85, of Princeton, passed away Saturday, October 24, 2020. Born January 18, 1935 in Hinton, he was the son of the late Estil and Kathleen Wilson. In addition to his parents, he was preceded in death by his brother, Jack Wilson. After graduating Hinton High School, Bill attended Greenbrier Military School in Lewisburg prior to joining the U.S. Army where he served two years at Fort Benning. He subsequently graduated from Concord College and joined the leadership team of G.C. Murphy Company, a job that would lead him to meet the love of his life, Jan. Bill and his family settled in Princeton where he worked as a State Farm agent for 35 years prior to retirement in 2000. Bill loved traveling and camping at Claytor Lake. He was a member of the First United Methodist Church in Princeton. Bill served on the board of directors for the Princeton Recreation Center and was a member of the Jaycees, Princeton Elks and Hinton Moose Lodge. Left to treasure his memory are his wife of 61 years, Janice Kay Blankenship Wilson; daughter Kimberly and husband, Robert Sheets, of Princeton; son William Scott and wife, Deborah, of Charleston, SC; grandson Chase Pilkins of Princeton; grandchildren Lakan Sheets of Huntington, Cody and Megan Sheets of Princeton; and great-grandchildren Nevaeh and Elizabeth; brother, Johnny Wilson, of Florida; and niece, Judy Wilson and family, of Virginia. A graveside service for family and friends will be held at 12:00 p.m. Wednesday, October 28, 2020 in the Gethsemane Garden of Roselawn Memorial Gardens in Princeton with Pastor Tom McDowell officiating. Military honors will be conducted by the Mercer County Veterans Honor Guard. Friends and family attending the service are asked to meet at the cemetery. Bill requested that in lieu of flowers memorial contributions be made to Feeding Hungry Children Fund at First United Methodist Church (304-991-1900) or the Salvation Army. Arrangements by Bailey-Kirk Funeral Home in Princeton. Online condolences may be shared with the family at www.bailey-kirk.com.

PRINCETON - William "Bill" Wilson, 85, of Princeton, passed away Saturday, October 24, 2020. Born January 18, 1935 in Hinton, he was the son of the late Estil and Kathleen Wilson. In addition to his parents, he was preceded in death by his... View Obituary & Service Information

The family of Bill Wilson created this Life Tributes page to make it easy to share your memories.

Send flowers to the Wilson family.