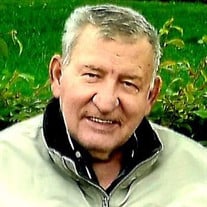 PRINCETON – William Hisel “Bill” Tate, Sr., 71, of Princeton, died Monday, March 12, 2018. Born October 25, 1946 in Providence, RI, he was the son of the late Joseph Edward Tate and Antonietta Terino Tate. His middle name was said to be a tribute to the doctor who delivered him. Everyone called him Bill. He grew up in Riply, West Virginia as one of seven children living and working on the family farm. He attended Riply High School and volunteered to join the US Army on August 10, 1966 during the Vietnam conflict. Fate did not have combat in store for Bill. Instead he served in West Germany where he met the love of his life, Gertrud. Bill and Gerti were married on August 1, 1969 and settled in Germany where Bill worked for the US Government. They traveled extensively and Bill learned to speak the German language. He loved German food and beer, and he was proud that he could communicate in a second language. Bill and Gerti had two children while still in Germany: Christina in 1970 and William Jr. in 1972. Bill brought his growing family back to West Virginia in 1974, and in 1975 their final child, Elisabeth, completed the family. Bill worked in construction as a truck driver and was a proud member of the Teamsters Union Local 175. He would often say he built things that would remain long after his death. During visits up north, he would point out sections of the WV Turnpike that he helped to build. Bill loved fishing and hunting in his youth. He had a brilliant mechanical mind and could repair almost any motor with ease. He was an excellent chess player and loved traveling. He loved going to new places and learning new things. He loved his family and was kind to everyone he met. He loved music, especially the man in black, and was known for making a joyful noise while singing “Long Black Veil.” He loved animals of all types and often spoke of riding on the backs of pigs and milking the cow on the farm where he grew up. At the time of his passing, he was feeding as many as six stray cats and loved to watch them play outside. He fed birds, too, much to the dismay of neighbors with cars parked beneath power lines. He was known by all area crows as a source of food, as well. He did the best he could with what he was given in life, and bravely faced his daily challenges. He was a loving and faithful husband and father. He tried to see the best in everyone and accepted people for who they were. He enjoyed spending time with his grandchildren and found them to be amazing bundles of energy. In addition to his parents, he was preceded in death by his mother-in-law, Maria E. Barth; a brother-in-law, Ray Casto; and a sister-in-law, Marie-Luise Barth. Survivors include his wife of 48 years, Gertrud Hilda Tate; daughter, Christina Tate-Noecker and husband Joerg of Princeton, son, William H. Tate, Jr. and wife Alicia of Princeton and daughter, Elisabeth Tate-Collin and husband Edward of Columbus, OH; four grandchildren, Adia Hayes, Quinlan McKenzie, Nicholas Noecker and Zan Collin. Additional chosen family, Stephen Hayes and Ryan McKenzie; siblings, Joe Tate, Cheche Casto, Bob Tate, Charlotte Tellez, Muesetta Holbert and Dillard Tate; brother-in-law, Fritz Barth; special friend, Glen Angelle; and countless nieces and nephews. Rite of Christian Burial will be officiated by Father Greg Lyttle at 12:00 p.m. Saturday, March 17, 2018 at the Bailey-Kirk Funeral Home in Princeton. Interment will follow at Oakwood Cemetery in Princeton where military honors will be conducted by the Mercer County Veterans Honor Guard. The family will receive friends Saturday, March 17, 2018 from 10:00 a.m. until service hour at the Bailey-Kirk Funeral Home in Princeton. To view a video tribute to Mr. Tate, or share condolences with the family, please visit www.bailey-kirk.com.

The family of Bill Tate Sr. created this Life Tributes page to make it easy to share your memories.

Send flowers to the Tate family.