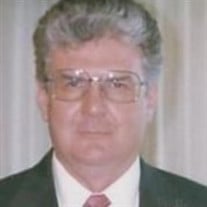 PRINCETON– Bert H. Barrett, Jr., 76 of Princeton died unexpectedly on Thursday, May 14, 2020. Born April 24, 1944 in Princeton, he was the son of Margaret Barrett Musick of Princeton and the late Bert H. Barrett. Bert attended Concord College, Anderson College, and Bluefield State College with degrees in accounting and computer science. He also worked at Rockwell International in Princeton where he invented a computer that was later patented by the company. Bert was a life-long learner and enjoyed teaching computer science at Bluefield State College and UCLA. In 1978 he started a successful computer software company in Princeton, and in 1983 he headed up the Sarasota, Florida division of Arthur Andersen where he provided economic, financial, and tax consulting services. Upon returning to West Virginia in 1996, he continued to write computer software for various coal mining companies throughout the United States and internationally. Beginning in 2016, he traveled regularly to Las Vegas to lecture on the latest computer software at coal mining conventions. In addition to his mother, he is survived by his wife of 55 years, Diane Warden Barrett; two daughters, Angela Rogers and Bridgette Leavitt and husband Bradley; two grandchildren, Hannah Leavitt and Truett Leavitt; four siblings, Susan Faulkner and husband Jim, Dr. Terry Barrett, Eddie Barrett, and Debra Harry and husband Sam; nieces and nephews. Bert was a devoted father and husband who put family first and foremost above all other things. He was kind, selfless, very giving to others, and rarely put himself first. Bert will be deeply missed by family, friends, and all who knew him. Honoring Bert’s request there will be no services at the funeral home. Arrangements by Bailey-Kirk Funeral Home in Princeton. Online condolences may be sent to the family at www.bailey-kirk.com.

The family of Bert H. Barrett Jr. created this Life Tributes page to make it easy to share your memories.

Send flowers to the Barrett family.