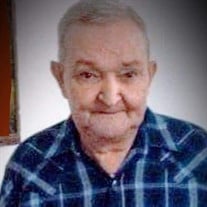 MATOAKA – Bernard Riley Weese, 75, of Matoaka, died Monday, December 14, 2020 at his home. Born December 12, 1945 in Hiawatha, he was the son of the late Paul Richard Weese and Florence Gross Weese. Bernard was of the holiness faith. He loved the Lord and always shared that love wherever he went. Bernard worked as a roofer, heavy equipment operator and coal truck driver. He also worked for Sterling Grocery as a route driver and Blankenship’s Garage in Matoaka. He last worked for Mercer Crush Stone before becoming disabled. In addition to his parents, he was preceded in death by his loving wife, Juanita Weese; one son, Dale Weese; one brother, Donald Weese; and two sisters, June Nicholson and Rebecca Mitchem. Left to cherish his memory include his wife, Rachel Weese; two sons, Bernard Dwayne Weese of Matoaka and Jeremy Weese of Rich Creek, VA; one daughter, Pamela Crigger and her husband Butch of Peterstown; grandchildren, Hope Willis and her husband Davie and Allen King and his companion Tasha Boswell all of Princeton and Chelsea Weese of Florida; great grandchildren, Alex and Allision Whitaker both of Sparta, NC and Julian King and Kirra McKinney both of Princeton; siblings, Lucy Laxton of Lashmeet, Carolyn Asbury and her husband Tommy of Springton, Zana Osborne, Paul C. Weese and his wife Jean, Ray Weise, Benny Weese and Rex Weese and his wife Michelle all of Matoaka and Timmy Weese and his wife Susan of Rock; and many nieces and nephews, including Shawn Basham, Paul Basham and Brandy and Harry Blankenship. A memorial service will be conducted at 1:00 p.m. Saturday, January 9, 2021 at the Bailey-Kirk Funeral Home in Princeton with Pastor Dannie Short and Associate Pastor Austin Burke officiating. The family will receive friends Saturday, January 9, 2021 from noon until service hour at the Bailey-Kirk Funeral Home in Princeton. To view a video tribute to Mr. Weese, or share condolences with the family, please visit www.bailey-kirk.com.

MATOAKA &#8211; Bernard Riley Weese, 75, of Matoaka, died Monday, December 14, 2020 at his home. Born December 12, 1945 in Hiawatha, he was the son of the late Paul Richard Weese and Florence Gross Weese. Bernard was of the holiness faith.... View Obituary & Service Information

The family of Bernard Weese created this Life Tributes page to make it easy to share your memories.

Send flowers to the Weese family.