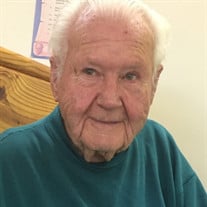 CLAYTOR LAKE, VA – James “Berkley” Shrewsbury, 89, of Claytor Lake, VA, formerly of Pineville, passed away peacefully on April 15, 2018 following a short illness. Born May 5, 1928 at Dott, he was the son of the late William McKinley Shrewsbury and Leota Flossie Shrewsbury. Berkley spent his early childhood in the Matoaka area. At age 14, he worked for Virginian Railroad. At age 15, he joined the Navy to help support his mother and siblings. He served in the Seabees during World War II and took great pride in serving his country. He spent 33 years in the mines, most of those at US Steel Pinnacle in Pineville. He retired to Claytor Lake in 1995. His greatest passions in life were a hard day’s work, cultivating and maintaining his purple martin colony on the lake, enjoying his VGN memorabilia and model railroad layout, and feeding his squirrels, deer and hummingbirds. He also loved fishing with Frank. Above all, his greatest joy was sharing his life with Jason and Gentry and enjoying the milestones of their lives. In addition to his parents, he was preceded in death by brothers, Mack, Donald, Jimmy and Doyle; and sisters, Evelyn, Ruby and Jewel. Survivors include son, James Berkley, Jr. of Beckley; daughter, Catherine of Charleston; son, Frank (Robin) of Claytor Lake; grandsons, Jason (Devon) and Gentry of Morgantown; and niece, Carolyn Ragan of Princeton. A private burial was on April 17, 2018 at Roselawn Memorial Gardens in Princeton. Arrangements by Bailey-Kirk Funeral Home in Princeton. Online condolences may be shared with the family at www.bailey-kirk.com.

The family of Berkley Shrewsbury created this Life Tributes page to make it easy to share your memories.