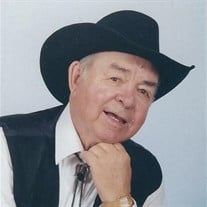 PRINCETON - Arnold “Booge” Monk, 95 went home to be with his Lord and Savior on Sunday, April 28, 2019. Born April 1, 1924 at Dott he was the son of the late Charlie and Mary Dalton Monk. Booge was a member of Full Gospel Assembly Church in Princeton. He was a retired coal miner and truck driver and member of UMWA. Booge enjoyed hunting, fishing and camping but his greatest passion was finger-picking the guitar. He started playing around age 6. His mommie would let him play his brother’s guitar when he wasn’t home. She put him on the bed and put pillows all around so he wouldn’t hurt the guitar. He was a self-taught musician. As a young boy he started playing for dances, apple peelings, stir-offs and corn shuckings. Booge really enjoyed the corn shuckings because the boy who found the first red corn cob got to kiss any girl he wanted to. He enjoyed gatherings with family or friends and telling stories of childhood, hunting and fishing tales. He played bluegrass festivals in West Virginia, Virginia, Kentucky, Tennessee and Ohio. Most of the time he took home the first-place blue ribbon on the guitar. His story was that he had enough blue ribbons to make a bed spread and that was true. Booge received The Distinguished West Virginian Award for his lifetime accomplishments in music. He played in several bluegrass and bluegrass gospel bands. His favorite was playing music with his family in church. In addition to his parents, he was preceded in death by his first wife, Rema Bailey Monk; daughter Shirleen Farmer; grandsons, Kenneth “Andy” Anderson and Dewight Farmer; brothers, Brady Monk and Arlie Monk and sister, Cordie Taylor. Survivors include his wife of 28 years, Linda Monk; daughters, Lila Jones and husband Ralph, Carmon Basham and Melissa Robinette and husband Bob all of Princeton; seven grandchildren; thirteen great grandchildren, eighteen great, great grandchildren and many nieces and nephews. Funeral services will be conducted at 11:00 a.m. Wednesday, May 1, 2019 at Bailey-Kirk Funeral Home with Pastor James Coburn officiating. Interment will follow at Woodlawn Memorial Park in Bluewell. Family will serve as pallbearers. Friends may visit with the family from 6-8 p.m. Tuesday, April 30 at the funeral home. Arrangements by Bailey-Kirk Funeral Home in Princeton. To view a video tribute or send online condolences please visit www.bailey-kirk.com. *Please check back after 6 p.m. Tuesday, April 30 to view a video tribute to Mr. Monk

The family of Arnold "Booge" Monk created this Life Tributes page to make it easy to share your memories.

Send flowers to the Monk family.