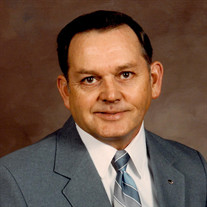 PRINCETON – Alvin Amos Otey, 87, of Princeton, went to be with the Lord on Friday, February 22, 2019 with his family by his side. Born March 29, 1931 at Hiawatha, WV, he was the son of the late Allen Otey and Bertha Pennington Otey. Alvin was a veteran of the U.S. Army serving in active duty in the Korean War from 1952-1953. He was retired from Consolidated Coal Company having worked from 1949-1987 and was a member of the U.M.W.A. Alvin was a faithful member of First Baptist Church in Princeton. He was an avid sports fan and enjoyed Mountaineer sports. In addition to his parents, he was preceded in death by his son, Darrell Otey; his sister, Olivia Setters; and his grandson, Tanner Otey. Left to cherish his memory is his wife of 65 years, Alice Spradlin Otey; sons, Ronald and Carolyn Otey, Gerald and Shelia Otey and Terry and Tina Otey all of Princeton and Scott and Cheri Otey of Draper, VA; sister, Jane Hood of Princeton; brother, Connie Jerry Otey of Ohio; 18 grandchildren; and 20 great-grandchildren. Funeral services will be conducted at 2:00 p.m. Monday, February 25, 2019 at the First Baptist Church in Princeton with Dr. David Dockery officiating. Interment will follow at Roselawn Memorial Gardens in Princeton. Serving as pallbearers will be Scott Otey, Josh Otey, Jamie Otey, Jesse Otey, Chad Femmino and William Eanes. The family will receive friends Monday, February 25, 2019 from 1:00 p.m. until service hour at the First Baptist Church in Princeton. Arrangements by Bailey-Kirk Funeral Home in Princeton. To view a video tribute to Alvin, or share condolences with the family, please visit www.bailey-kirk.com.

The family of Alvin Otey created this Life Tributes page to make it easy to share your memories.

Send flowers to the Otey family.